We left Frankford with a goal of going through six locks to Cambellford by noon. Shortly afterwards, we got a call from wishing me a Happy Father’s Day and filling us in on her morning’s experiences at work in . It was good to hear her voice.

We are beginning to enter areas of the Trent-Severn where there are natural lakes connected by man-made canals and lakes that were created by the many dams. It makes for a nice variation in scenery as we transition from one to the other.

Our first lock went smoothly; however, when we got to lock 8 we were advised that the next lock was closed and boats were backed up. The power plant just above the lock went off-line for some reason, and the major collection of debris that had accumulated in the water intake pipes was flushed out, floated downstream and was clogging the lock entrance. Until a crane arrived and could the clear the debris, we were being held up. It could be hours or the full day. 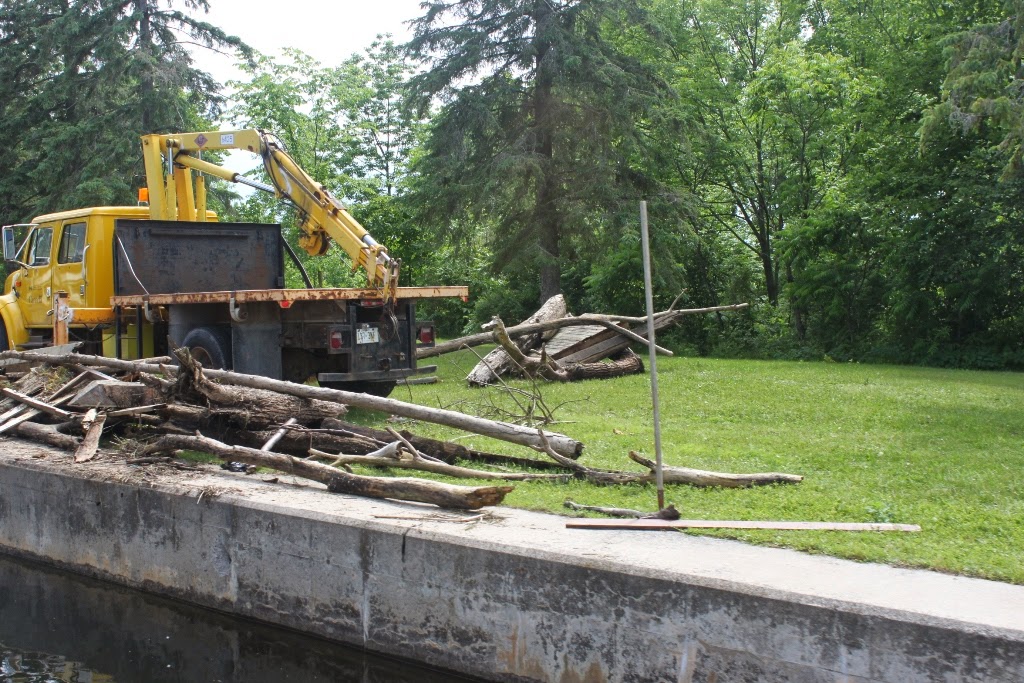 While waiting we met a couple from Holland, MI, just 20 south of Spring Lake, who were also doing the loop in a boat named PRIORITIES!. Soon, the very friendly lockmaster offered to take Anne and two other stranded female boaters in his truck to visit the Empire Cheese & Butter Co-op. Its cheese comes from seven different dairy farms in the area and has won numerous awards at the Royal Winter Fair in . Anne came back with large quantities of cheese: smoked , salsa cheese, 7-year aged cheddar cheese, cheese curds, etc.!  Fortunately, at about 3:00 pm, we got the word that we could continue through the locks and would get to Campbellford yet today.

We did make , docked on the river wall and took a walk through this small town. The marina advertised WiFi, but like many we visit, the signal is either too weak or just doesn’t work at all. I’ll be sitting in front of the town library using their WiFi later tonight to upload this post.