We departed early in heavy fog intending to anchor at the Alabama River Cut Off. However, due to favorable downriver currents, we made it another 13 miles to the Tenasas River (MM 39.3). The inlet was wide and deep, so we had no problem getting in and settled. On the way, we passed through the Coffeeville Lock and Dam, which is the last lock on the Tenn Tom. We won't see another lock until Virginia!

We are now experiencing the first water connected directly to Mobile Bay and the Gulf. This means we are starting to get into salt water and beginning to sense the ocean tides and tidal currents.

Tides are as new to us as they would be to anyone who has only boated on the Great Lakes. They are in fact big waves that move through the oceans in response to the gravitational pull of the sun and the moon. Knowing at any time how fast the tide is moving and in what direction is important to navigation and planning.

For example, tomorrow we will run the rest of the river and enter Mobile Bay. If the tide is receding, we will make better time than if it is building. I have an app on my cell phone that gives me that data. Unfortunately, it is telling me that we will be going into an advancing tidal current. This could decrease our speed by a couple of miles per hour, but we will still get there by afternoon. 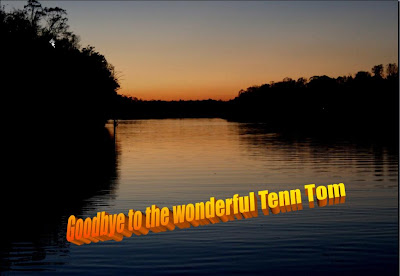