Today we passed through the last section of the Tenn Tom, which some refer to as the Mobile River, and entered Mobile Bay. This is a major milestone as we have now completed the interior river system and will soon be entering the Intracoastal Waterway (ICW).

The river had a completely different look here, more like the swamps of Florida, and different wildlife began to emerge. The land is flat and flooded, with Cypress trees, many exposed tree roots, and Spanish Moss decorating the trees. We saw our first sea gulls and pelicans, and even saw a deer and her faun swimming across the river.
Then, coming around the final river bend, we saw the first view of Mobile and the city skyline. Here we suddenly transitioned into high industrialization, container ports, many major boat yards including commercial and military vessels, and high marine traffic consisting of tugs, fishing boats and ferries. The chart plotter showed such a mire of boats transmitting their positions, you couldn't distinguish one from another. What a change from the peace and quiet of the rivers to the high activity of a big city and major port!

Here is the beautiful riverfront Mobile Convention Center, flanked by the two tallest buildings in the city. Nearby was this beautiful tug and a prototype stealth Navy destroyer.

Mobile Bay is over 10 miles wide and 40 miles long, and as we moved into the bay we followed a tug going out to escort a large ship into port. Shortly afterwards, I saw our first dolphin riding the bow wake. The winds were up and the bay is shallow, and we quickly found ourselves in high waves as we moved down to stay at Turner Marine Supply. 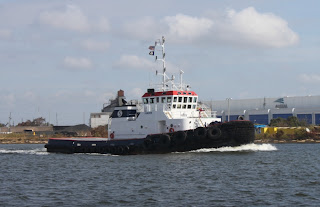 Once settled at Turner, Anne called her Ole Miss sorority sister, Cathy, and she came over from Pascagoula for a nice visit and dinner at Felix's (great seafood). It was fun, and overall this was a great day.